Only $50 Away From Free FIRST CLASS U.S. Shipping (CLOTHING Only) The latest in the Superare Artist Series is a high concept collab between us, the incomparable Dosbrak, and both our Ali and Bruce Lee licenses.

Titled: "Two Kings" this tee pays homage to the larger-than-life personalities of two of the most popular icons of the 20th century.

The first 500 people who order this tee get a limited edition Ali OR Bruce Lee playing card as well (while supplies last).

Dosbrak’s work features many themes, but among the most recurring are the concept of champions and/or kings - with much of his work based around an ethos which states that a meaningful piece of art must tell a story.

First time shopper. Super happy with my purchase. Shirt is better in person than online. Fingers crossed there will be more collaborations with Dosbrak in the future!

Amazing Artwork by Dosbrak, great fit true to it's size!

Love everything about this shirt. The design is amazing I only bout one but I’m ordering another right now. I got the Lee card hopefully I can get the Ali next.

Can't wait to wear it! 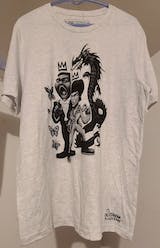 A
Alex Vitale
Love this shirt!